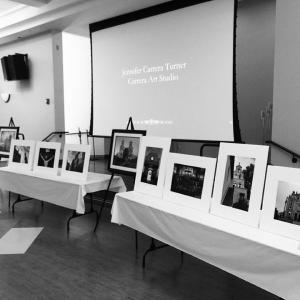 I had an excellent turnout for my Photography Exhibition yesterday! Below is the slideshow gallery of the DVD that I produced for the event. What a beautiful venue!

It was 8 years after graduating from School of the Arts and 3 years after graduating from college that as my profession as a Funeral Director which is my profession (besides my art and photography) now of 17 years that I came across this beautiful framed photograph of a Spanish church at a thrift store.  So I believe it must have discovered it in 2001.  I placed it in my living room directly above the TV because I loved it so much that every chance I had I wanted to be able to see it.

I thought that because of the coloring and age of the photograph that I decided that it must have been created during the 1970’s. Unfortunately there is no signature or indication on this photograph as to where this church is located or whom had photographed it. My only lead was on the back it was professionally framed in New York and the framing company with an incomplete address was indicated. Therefore I wrote a letter to that framing company, I admit it was silly but at the time the internet was still in it’s infancy otherwise I would have searched that way. It was expected that I would not receive a response.  And besides I honestly could not evaluate whether it was Spanish American, Mexican or Spanish. I must say that I prayed to God so often that it’s location would be revealed to me as I was so enamoured by this Spanish style architectural church.

Three years had passed, and as a funeral director I was making the funeral arrangements of an estranged family who had lost their father in a tragic car accident. The most important member of this family who basically were the children versus the ex wife were involved in a great family disagreement. The daughter and her mother (the ex wife) made the cremation arrangements with me and we had a special bond as I do with many of my families and I truly care for my families. After we had settled all of the decisions and I did my absolute best to make things easier for them, they returned to their very distant homes away from Florida.

This is where my story takes its incredible turn about a month later. I received this post card from the ex-wife and it turned out that she is a photographer and artist and I had shared with her my love of all of these things. She had invited me to stay in Tucson, AZ with her and her husband, When I saw the photo on that post card it was a “nighttime shot” – but it was the exact CHURCH IN THE PHOTOGRAPH that I have had above my television all this time and that I had prayed for almost 3 years to learn where is what located. God had answered me in a way that I know I am on his path.

This church which had turned out to be the Mission San Xavier del Bac located in Tucson, AZ. I have visited there now several times and it will remain my most cherished and beloved location on this earth. There is a side mortuary chapel to the left of the main church, twice I have left one of my photos with a request asking God to tell me why he has brought me there. It was the first Spanish Mission I had ever visited and the beginning of my obsession that would lead me to make pilgrimages to all of the other Spanish missions.

In the photo above is the original framed photo that I purchased and the front original and back copy of the post card I had received.

© Jennifer Carrera Turner and Carrera Art Studio, 2011 – 2018. All rights reserved. Unauthorized use and/or duplication of this material or images without express and written permission from this blog’s author and/or owner is strictly prohibited. Excerpts and links may be used, provided that full and clear credit is given to Jennifer Carrera Turner and Carrera Art Studio with appropriate and specific direction to the original content.