On Saturday, October 15, 2016 at The Box Gallery, West Palm Beach, FL a gathering of South Florida’s art & cultural pioneers came together to educate the patrons of our local art community about the struggles, reality and the progress made primarily in the South Beach Miami area. Rolando Chang Barrero, was the creator/host/gallery owner of this magnificent event titled: “Art and Culture of South Beach Renaissance: The American Riviera”.

The speakers and presenters were as follows: Sandra Schulman, founder of NYC galleries, nationally renown art curator, documentarian, film producer; Louis Canales, international creative director/writer, photographer, master facilitator and event coordinator of visual and performing arts worldwide; Manny Hernandez, “Manny of Miami”, life-long acclaimed professional celebrity photographer, exclusive periodical photography for high-end socialites and clientele, and Miami News Media; Liz Balmaseda, Pulitzer Prize-winning journalist, internationally known writer/field/associate film producer and Hispanic Heritage Award winner for literary excellence in Washington D.C.. The individuals above have so many more credentials and list of accomplishments than I can account for here in this blog so I recommend that you take the time for your own individual research.

It was an honor and priveledge to meet these people first hand in the intimate setting of The Box Gallery. The event focused on how these individuals contributed with their own individual talents, and abilities to project their art and passion within the South Miami Beach community at a time when it was on the verge of changing from a local retirement community with historic oceanfront hotels and vintage apartments into a wild nightlife destination and international playground. These accounts focused of the period of the 1980’s and 1990’s. Throughout the diverse economic challenges came the progressive changes in arts and architectural movements, films and popular television shows.

South Beach “SoBe” initiated by Louis Canales achieved status as a major entertainment destination, fashion and art mecca. A very architecturally unique city with a major revitalization boom.  Photographer Manny Hernandez gave an incredible insightful presentation on screen of his personal work and explanations on what it was like to encounter celebrities such as Gianni Versace, Madonna, Jennifer Lopez and countless many stars too grandiose to recall.

Louis Canales reflected upon the early days of getting his photography printed for early morning departures and deadlines, industry demands and hard work involved in being an advocate for the city of Miami Beach and so many others. Liz Balmaseda recounted her memories of growing up in Miami, the local Cuban Cuisine and the beginnings of gourmet innovations that made influences upon the up-and-coming Latin Fusion flavors.

This event was held in a classroom style amongst the fascinating current art exhibit of Don Shearer. As a Florida native like myself, Rolando Chang Barrero having made an opportunity like this available to the public for both pleasure and education, is just one of many things that he has done for our local arts communities throughout Palm Beach County. In many ways hearing what the speakers and presenters had to share at this event acknowledges the reality of what Rolando’s revitalization efforts are here. It shows not only his love of art but also our community and future. 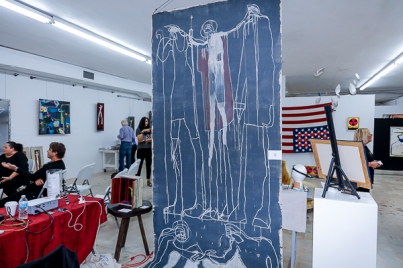 Images of the hip and contemporary The Box Gallery, West Palm Beach, Florida.

Currently exhibiting: The Work {OF} Don Shearer: A Retrospective

An awesome place to be encapsulated.

© Jennifer Carrera Turner and Carrera Art Studio, 2011 – 2018. All rights reserved. Unauthorized use and/or duplication of this material or images without express and written permission from this blog’s author and/or owner is strictly prohibited. Excerpts and links may be used, provided that full and clear credit is given to Jennifer Carrera Turner and Carrera Art Studio with appropriate and specific direction to the original content.